Panini’s Official Premier League Adrenalyn XL Trading Cards are back for the 2020/21 season with a new look and new categories. 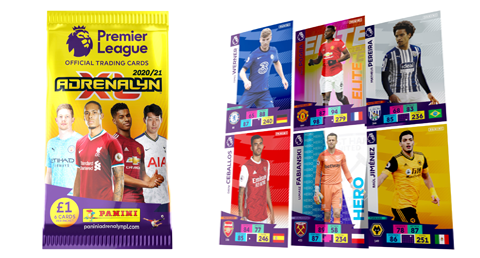 Panini has launched the completely re-branded and refreshed the Adrenalyn XL trading card collection, which will hit shelves in the UK and Republic of Ireland on Thursday 20th August, featuring all of the Premier League’s top talent. The launch follows the successful release of Football 2020, Panini’s first-ever Premier League sticker collection, which was the biggest-selling collectible launched in the UK and Republic of Ireland in 2019.

Premier League Adrenalyn XL 2020/21 is the only trading card collection to include all 20 Premier League clubs and is the must-have collection for football fans and collectors alike. The collection features 468 trading cards plus 30 limited edition cards available across a new-look range of SKUs, including Multi-packs, Pocket and Classic Tins, and a Countdown Calendar.

Fans can kick start their collection with a Starter Pack, which includes a high-quality collector’s binder, two-player game board, poster, 18 trading cards, an exhaustive magazine game guide, plus two guaranteed limited edition cards. Starter Packs are priced at £5.99 and packets, which include six trading cards and one QR code leaflet, are £1.00 each.

A huge multichannel marketing campaign is lined up, which includes extending its cross-promotional activation with fellow Premier League partners and delivering a heavyweight TV, radio, VOD and digital campaign. The launch will be supported by football influencers and a new sampling mechanic in place with the UK’s top-selling newspaper. Panini has also forged new football magazine cover mount partnerships which, alongside Panini’s own football magazine Strike-It!, will facilitate the sampling of millions of packets to football-loving kids across the British Isles.

Mike Riddell, managing director of Panini UK, commented: “Panini is taking Premier League trading cards to a new level for the 2020/21 season. Premier League Adrenalyn XL 2020/21 is a dynamic new collection which will be refreshed as new players transfer into the world’s most exciting league.”