Football fans can enjoy all the build up to next year’s event by collecting the new and exclusive stickers. 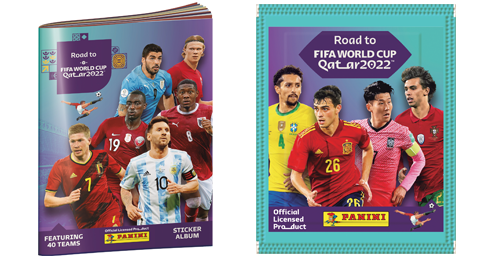 This week sees the kick off for Panini’s Road to FIFA World Cup Qatar 2022 Sticker Collection, in the build up to football’s greatest prize.

The new and exclusive Panini sticker collection will hit shelves this Thursday (4th November) and covers the 40 nations who are looking to book their place at the event, which is scheduled to take place in Qatar from 21st November to 18th December 2022.

Football fans can collect all 40 teams featured, each of them featuring 15 different players. A final 32 nations will eventually compete against each other for the prize with continental qualification pathways currently taking place.

It will be the first World Cup ever to be held in the Arab World; due to Qatar’s intense summer heat, this World Cup will be held in November and December, making it the first tournament not to be held in May, June, or July; it is also to be played in a reduced timeframe of around 28 days.

“We are excited to kick off the journey to the FIFA World Cup in Qatar with the official Road to FIFA World Cup Qatar 2022 Sticker Collection. The stage is already set for an incredible and unique tournament next year, and football fans are really going to enjoy collecting, swapping and sticking the world’s best players in an album that will be kept and treasured over time,” said Chris Clover, head of marketing for Sport, Panini UK.

Collectors will be able to kick off their collection with a starter pack featuring a sticker album plus 26 stickers.