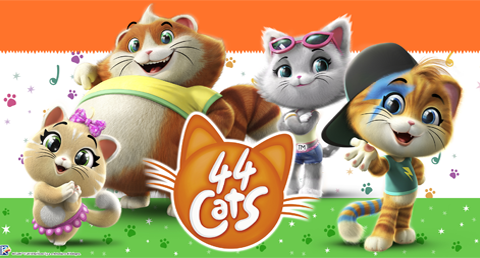 Since its debut in the UK, Rainbow’s 44 Cats has been growing consistently, with the show reaching millions of viewers and increasing audiences month after month, establishing itself as one of the most popular properties among children aged three and above.

The first season of 44 Cats started airing on Pop TV, Nick Jr and Nick Jr Too in 2019. The 52 x 13’ animated series is a mixture of music and cute cats telling the daily adventures of four kittens — Lampo, Milady, Pilou, and Meatball — who form a band called the Buffycats.

The original score is a collection of Italian children’s songs revisited for the show and performed by Antoniano Bologna’s Children’s Choir, which makes the property stand out as unique in the current offer of kids content. From TV to web platforms, media outlets are quickly falling for the charm of the show, dealing with themes such as diversity and altruism and combining values, action and comedy in a sophisticated CGI production for pre-school audiences.

The partnership between Rainbow and Lisle Licensing, which is licensing the brand across the UK, is reinforcing the success of the brand. The official UK toy partner, Simba Dickie’s Siso Toys, started distributing the toy collection from February. The range created by master toy partner Toy Plus is based on the key elements of the series – music, creative play patterns and collectibility – and includes interactive plush toys, figurines, play sets and musical toys.

Major CP deals are in place with UK partners, including John Toys and Amscan, developing products with multi territorial deals and many others such as Sony Music, Dreamtex, Redan Publishing, Fashion UK, Ravensburger, Clementoni, Chicco & Bip.

After captivating TV, social media and streaming platforms around the world, the brand has an extensive PR and marketing plan in place for both trade and consumer audiences.