The announcement comes ahead of the premiere of the Miraculous movie, Ladybug & Cat Noir: Awakening, which will be released from autumn 2021. 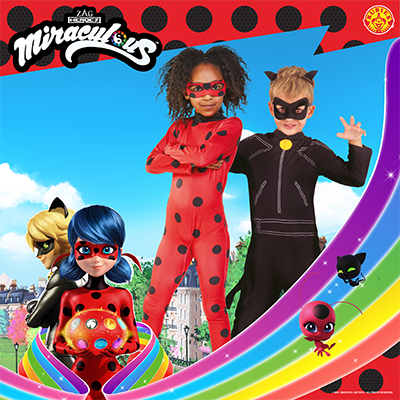 Zag and Rubies have announced announced a Pan-European alliance to develop, manufacture and distribute costume dress up and accessories for Zag and On kids & family’s flagship brand, Miraculous: Tales of Ladybug & Cat Noir.

The new agreement is a testament to the robust partnership between Zag and Rubies, cultivated over five years, and resulting in the continued strength of Miraculous costumes sales across EMEA. Together, the two companies plan to bring further innovation to the character costumes for the popular TV show, supporting sustained growth and viewership. The renewed partnership will see more focus on dual marketing activations and content creation produced between the two brands to reach millions of fans.

Mike O’Connell, managing director of Rubies Masquerade, commented: “It’s always a fantastic achievement for Rubies to extend any licensing agreements, but with this one we have taken our partnership with Zag to a new level. We are proud that Zag recognises the strength of our brand and quality of our product as industry leading, and that together, Rubies and Zag Lab will design, produce, and distribute imaginative costumes and accessories to inspire audiences of all ages with the same magic present in the popular TV series.”

“Rubies is an industry leader, bringing imagination and creativity to each and every product they produce,” added Jeremy Zag, founder and CEO, Zag. “This new agreement is a natural extension to our existing partnership, with both Rubies and Zag Lab working side by side to capture the magic of Miraculous in costumes and accessories so that our fans of all ages can dress up and bring Miraculous to life. We are extremely proud of this partnership.”

Season four of Miraculous: Tales of Ladybug & Cat Noir started rolling out across the globe earlier this year, with the world premiere on 11th April 2021, on TF1 in France, which attracted a 47.7% market share amongst kids 4-10 years old, and a 25.9% female audience share. The series airs in over 120 countries across the globe, occupying the No.1 spot in multiple territories including France, Spain, UK, Italy, Turkey, Poland, Middle East, North America, Mexico, Brazil and Japan.

In the digital realm, Miraculous attracts over 19.6m subscribers across its nine official YouTube channels, currently available in eight languages. With a total 25b views, fans have collectively viewed more than 1.7b hours of content. Miraculous is available on TikTok, Facebook, Twitter, Instagram and Tumblr, whose 12 official accounts feature dedicated accounts for the series’ main characters boasting 6.6m followers in total. Miraculous is the winner of 19 awards, including the 2018 Teen Choice Award for Choice Animated Series and airs in over 120 territories around the globe.