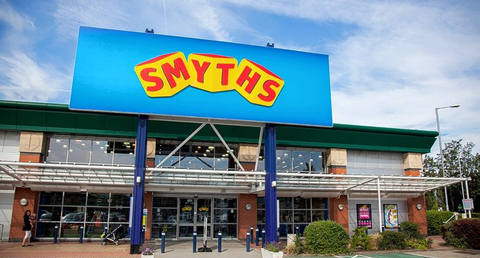 According to new accounts filed by Smyths Toys UK Ltd and Smyth’s Toys NI Ltd, combined revenues decreased only marginally by £1.3m from £667.874m to £666.56m, despite the Covid-19 shutdowns on the company’s bricks and mortar store network during part of 2020. The UK company last year paid out a dividend of £31m.

Since the company’s store network has been able to reopen, the directors reported that all stores are performing strongly.

The directors also stated that they are pleased with the company’s 2020 performance, “particularly given the current economic climate, the competitive market place and the outbreak of Covid-19”.

Smyths Toys operates 106 stores in England, Scotland and Wales with another seven in Northern Ireland.

In total, the group operates 248 stores across its entire network in the UK, Ireland and continental Europe.

Along with the 113 stores in England, Scotland, Wales and Northern Ireland, Smyths Toys operates 21 in the Republic of Ireland, 88 in Germany, 16 in Austria and 10 in Switzerland.

The directors also stated: “It is envisaged that further expansion will occur in the UK market in the coming years through the opening of new stores.”

As the company looks forward to the all important Christmas trading period this year, it has released its annual winter catalogue with 300 pages of inspiration for Christmas.