Alpha Animation and Tiny Pop have partnered for the special episode, which is part of the promotional activity for the franchise in 2022. 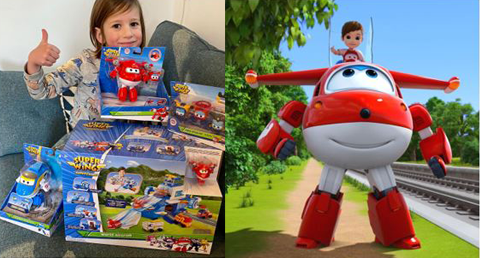 Five-year-old Finnley Hignett, from Powys, Wales entered the on-air competition, and won the Super Wings prize, securing himself a starring role within the popular pre-school show, and will make his debut as an animated character alongside Jett and friends, in a bespoke episode entitled Super Wings’ Super Sidekick. The episode, which airs this Sunday (6th March), sees the duo travel to Shanghai on a special delivery, teasing new themes from the upcoming Season 6, and featuring new characters including a high speed train called Tony.

Super Wings Season 6 launches this year on Cartoonito and Tiny Pop with 40 new episodes and features a brand new World Guardians theme which tasks the Super Wings crew with protecting the environment.

Claudia Dalley, head of programming for Pop channels, said: “We are thrilled to partner with Alpha on this innovative and industry leading initiative. It has been fantastic to offer UK fans a true “money can’t buy” prize opportunity to star alongside their favourite characters and we are looking forward airing this very special episode.”

Super Wings first hit UK screens back in 2017 and is now in its sixth consecutive year with dual broadcast partners Tiny Pop and Cartoonito.

Antoine Erligmann, vice president International Media, Alpha Animation, said: “We are delighted to partner with Tiny Pop on this unique, unprecedented and exciting opportunity to engage fans. It is testament to our global Super Wings animation team in developing such bespoke localised content, and bringing this special episode to life for our prize winner Finnley.”

Tiny Pop will premier the special episode at 12 noon and 5.30pm before moving to the Pop Player.