Thomas & Friends: All Engines Go to arrive on Milkshake! in November

All Engines Go is only the fourth major revamp ever for Thomas & Friends in the property’s 75-year history. 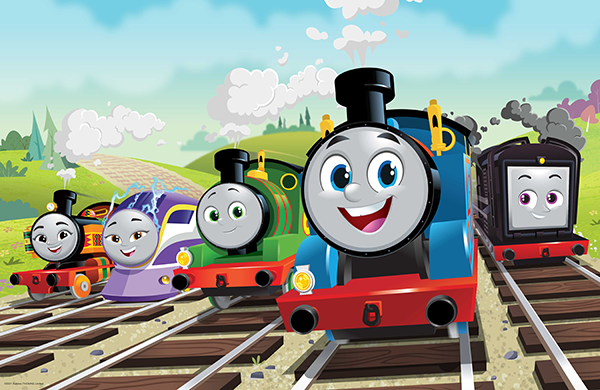 Produced by Mattel Television, in partnership with Corus Entertainment’s Nelvana Studio, Thomas & Friends: All Engines Go is only the fourth major revamp for the world-famous children’s animated show during its 75-year history. The new series follows a more playful and relatable Thomas as he strives to be the No. 1 Tank Engine through trial and error, all while enjoying being a kid.

Highlights of Thomas & Friends: All Engines Go include a greater range of character expressiveness, more physical comedy and music, and core characters that are now voiced by British child actors. The upbeat and colourful show is crafted to appeal to contemporary audiences’ sensibilities while maintaining Thomas’ core message about the value of friendship.

Thomas & Friends: All Engines Go incorporates 26 social-emotional, cognitive, and physical life lessons throughout the series, including friendship, taking turns, teamwork, self-help and empathy. While Thomas is the hero of this series, he always has his friends by his side. Four additional engines make up the core cast of characters: Percy, Nia, Diesel and Kana.

Fred Soulie, senior vice president and general manager, Mattel Television, said: “This new creative direction for the classic Thomas & Friends franchise is crafted to appeal to contemporary audiences, yet still maintain the beloved characters’ core ethos: the value of friendship. Thomas & Friends: All Engines Go features stories that are both timeless and timely, with themes that will resonate with children, parents and caregivers alike.”

Christopher Keenan, senior vice president Global Content, and executive producer, Mattel Television, added: “We can’t wait for the next generation of fans to meet Thomas and his friends. In Thomas & Friends: All Engines Go, we aim for audiences to have fun as we expand the world of Sodor in new and exciting ways. For the better part of the last decade, I’ve had the privilege of working on the Thomas & Friends television series and I’ve seen first-hand how Thomas and his core message about the value of friendship inspire a broad audience – children, parents and caregivers alike. These stories are both timeless and timely, with themes that continue to resonate with kids today”.

Kelly Philp, director of marketing, Mattel UK, commented: “Thomas & Friends has 92% brand awareness in the UK, so we are looking forward to exciting our Thomas fans, both new and old, with all the fun and adventure of the show’s new approach. The songs and endless laughs have already tested well with our pre-school audience and Thomas & Friends: All Engines Go will be a great tool for parents and caregivers too, due to the integrated life lessons and values incorporated within the content.”

In the UK, the series will be preceded by a new 60-minute animated motion picture, Thomas & Friends: Race for the Sodor Cup, showing at Vue and Odeon cinemas throughout the UK from Friday 17th September. This will be the first time children and parents can see the new-look and feel Thomas & Friends before it hits television screens on 8th November.