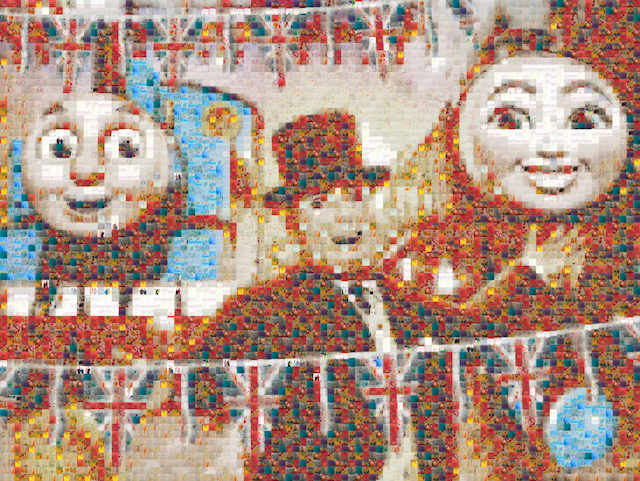 Thomas & friends unveiled a new digital artwork by renowned artist Nathan Wyburn in celebration of this year’s International Friendship Day on 30th July. The interactive mosaic image is made up of 400 pictures of kids and their friends, drawn by children from around the UK on their return to nursery and pre-school earlier this month.

The interactive mosaic image features a zoom function that allows viewers to look closely at each individual picture. Collectively, the drawings make up a gigantic image of Thomas, The Fat Controller and royal engine Duchess based on a poster image of ‘Thomas & Friends: The Royal Engine’, the episode which aired earlier this year as part of the brand’s 75th Anniversary celebrations. The 22-minute special featured an introduction from Harry, the Duke of Sussex and starred actress Rosamund Pike as the voice of royal engine Duchess, and now has its own toy line.

Children from around the country have shared drawings of themselves with their best friends. Friends of the brand, including Peter Andre and his children Theo and Millie, also joined the fun.

The picture also includes  well-known celebrity friendships, including Ant and Dec, Ed Sheeran and Stomzy, Geri Horner and Emma Bunton and Idris Elba and Dwayne Johnson. These images were drawn by Thomas & Friends book illustrator, Daniel Crisp and included in the digital artwork for people to hunt for at www.thomasfriendshipday.com.

Claudia Caron, marketing manager at Mattel, said: “In this special 75th anniversary year for Thomas & Friends, we are celebrating friendship in as many ways as possible. This includes taking a look at what it means to be a good friend and how we can nurture these important relationships, so they bring us a lifetime of joy and happiness. We know how difficult it has been for children not being able to see their friends recently, so we wanted to commission this very special artwork made up of all their pictures to immortalise these special friendships, and to raise a smile amongst everyone who sees it during these challenging times.”

The partnership is also being supported with further marketing support, including digital and social activations.