Originally scheduled for a theatrical release on 20th November 2020, Soul is the latest title to opt for a later streaming service release. 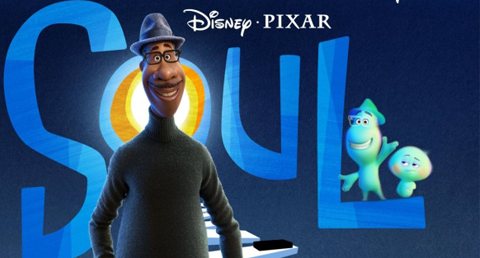 Pixar's upcoming animation Soul is set to skip it’s November cinema release and will instead stream exclusively on Disney+ on Christmas Day.

The film was originally scheduled for a theatrical release on 20th November 2020, but the impact of the ongoing coronavirus pandemic on cinemas has triggered a change of plan for Soul, alongside a number of other titles with a 2020 release date.

Directed by Pete Docter, Soul tells the story of a middle school teacher named Joe Gardner (Jamie Foxx), who dreams of becoming a professional jazz musician. However, just as a major opportunity presents itself, he's involved in a life-threatening accident and his soul is separated from his body. After learning that he is still alive, Joe asks fellow soul 22 (Tina Fey) to help him get back inside his body.

Unlike Mulan, which also went straight to Disney+ at an additional cost, Soul will be available to subscribers at no extra charge. The film will still be released in cinemas in countries where Disney+ is not available, with dates to be announced in due course.

The Walt Disney Company's chief executive officer, Bob Chapek, said: "We are thrilled to share Pixar's spectacular and moving Soul with audiences direct to Disney+ in December. A new original Pixar film is always a special occasion, and this truly heart-warming and humorous story about human connection and finding one's place in the world will be a treat for families to enjoy together this holiday season."

News of Soul's Disney+ release comes after MGM, Eon and Universal announced the delay of the new James Bond film, No Time to Die, which, having originally been postponed to 20th November 2020, is now due to hit cinemas on 2nd April 2021.

Cineworld also announced last week that it would be closing all of its 127 UK cinemas until next year, when a larger number of people will hopefully be able to attend screenings. Odeon and various other cinema chains have also announced closures.

Currently, the next major blockbuster title set to arrive in cinemas is Wonder Woman 1984, which is aiming for a Christmas Day release.