Toy World spoke to Midco Toys owner Dave Middleton shortly before his new Burton shop opened, to find out about the move, and what the new store offers. 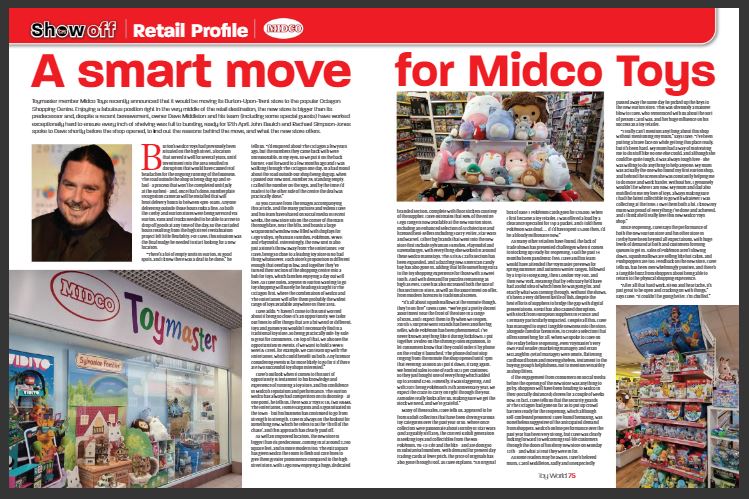 Toymaster member Midco Toys recently announced that it would be moving its Burton-Upon-Trent store to the popular Octagon Shopping Centre. Enjoying a fabulous position right in the very middle of the retail destination, the new store is bigger than its predecessor and, despite a recent bereavement, owner Dave Middleton and his team (including some special guests) have worked exceptionally hard to ensure every inch of shelving was full to bursting, ready for 12th April.

When we spoke to Dave on the Friday before reopening, Toymaster’s very own Paul Reader (marketing manager) and Brian McLaughlin (retail manager) were onsite, flattening cardboard boxes and moving shelves, testament to the buying group’s helpfulness, not to mention versatility as shop fitters.

The new store sits on the corner of the centre’s main thoroughfare, near the lifts, and boasts a large wraparound window now filled with displays for Lego Vidiyo, Sylvanian Families, Pokémon, WWE and Playmobil. Interestingly, the new unit is also just a stone’s throw away from The Entertainer, and Dave explained to us his, perhaps surprising, attitude to having such high profile competition.

Boasting an improved location, the new store is bigger than its predecessor, with extra space to flesh out core lines to give them greater prominence compared to the high street store. Dave discussed which ranges he considers key, and what lines are performing well this year, both in the core ranges stocked and the latest craze lines currently in demand.

As well as traditional toy shop sales, a large part of Midco Toys trade comes from Kidult collectors that have been driving various toy categories recently. Dave told us more about this side of his business, as well as a new American candy bay that has been introduced, adding something extra to the toy shopping experience

Dave went on to discuss the challenges presented by the lack of trade shows in terms of product selection, and how he and his team have coped with Brexit disruption. However, he was clearly looking forward to welcoming real-life customers on Monday 12th – and what a treat they were in for.

As some readers may be aware, Dave’s beloved mum, Carol Middleton, sadly and unexpectedly passed away the same day he picked up the keys to the new store. “I’ve been putting a brave face on while getting this place ready, but it’s been hard,” Dave told us. “I know my mum was proud of everything I’ve done and achieved, and I think she’d really love this new Midco Toys shop.”

To read the full interview with Dave, which appeared in the May edition of Toy World, click here.