Toy World spoke to Joeri Hoste, director of international sales at Exploding Kittens, about the company’s games and what lies ahead for 2021. 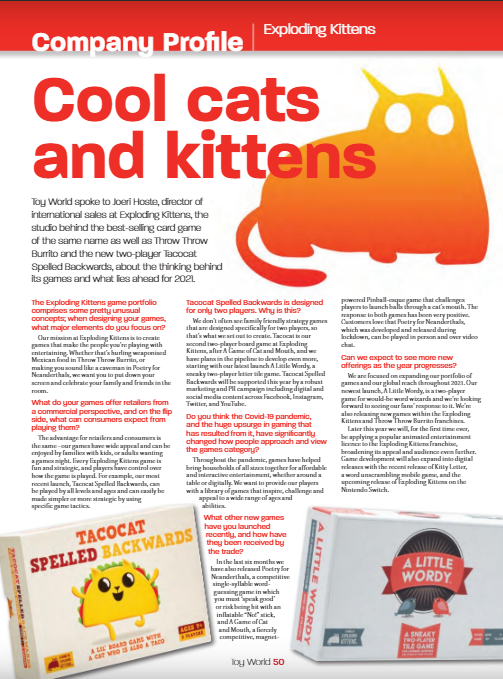 Exploding Kittens is the studio behind the best-selling card game of the same name as well as Throw Throw Burrito and the new two-player Tacocat Spelled Backwards. We asked Joeri about what major elements the studio focuses on when designing its games.

“Our mission at Exploding Kittens is to create games that make the people you’re playing with entertaining,” he revealed. “Whether that’s hurling weaponised Mexican food in Throw Throw Burrito, or making you sound like a caveman in Poetry for Neanderthals, we want you to put down your screen and celebrate your family and friends in the room.”

With news of the company’s recent introductions, Poetry for Neanderthals, Tacocat Spelled Backwards, A Game of Cat and Mouth and latest launch A Little Wordy, the interview also reveals that plans are in place to expand the Throw Throw Burritto and Exploding Kittens franchises. A popular animated entertainment licence will be applied to the Exploding Kittens franchise, broadening its appeal and audience even further. Game development accross the range will also expand into digital releases.

“Throughout the pandemic, games have helped bring households of all sizes together for affordable and interactive entertainment, whether around a table or digitally. We want to provide our players with a library of games that inspire, challenge and appeal to a wide range of ages and abilities,” said Joeri.

To read the full interview, which appeared in the April edition of Toy World, click here.